The human coronavirus is commonly spread through respiratory droplets in the air from a sick person, close personal contact, or by touching a surface with the virus on it. You can take steps to protect yourself and prevent the spread of the virus by washing your hands often, not touching your face, cleaning frequently touched surfaces, avoiding close contact with sick people, and practicing good respiratory hygiene.

Here are steps you can take to protect yourself and your loved ones and prevent the spread of coronavirus:

Students and teachers spend most of their school day in classrooms. And thanks to hardworking and creative teachers, these rooms are transformed into welcoming educational environments. They can bring life to an otherwise bland space with decorations and inspire students with innovative lesson plans.

But with such high use and so much going on, classrooms also need to be safe environments. Places where students can learn and teachers can teach without worrying about getting hurt in an accident.

So as teachers prepare their rooms for the start of school—and maintain them throughout the year—they should be aware of dangers lurking in the classroom. And they should be equipped with simple safety precautions that can prevent injuries to themselves and their students. Consider sharing these 9 classroom safety tips with your teachers to help build a safe and secure environment:

Classroom safety is an essential part of school risk management. It’s where students and teachers spend most of their time. So ensure your teachers are aware of classroom safety hazards and you’re equipping them with resources to create a safe learning environment for students and staff.

When Kem Senou Pavel Daryl, a 21-year-old Cameroonian student living in the Chinese city of Jingzhou, contracted the coronavirus he had no intention of leaving China, even if that were possible.

“No matter what happens I don’t want to take the sickness back to Africa,” he said from his university dormitory, where he is now under a 14-day quarantine.

He was suffering from a fever, a dry cough, and flu-like symptoms.

When he became ill he thought of his time as a child in Cameroon when he contracted malaria. He feared the worse.

“When I was going to the hospital for the first time I was thinking about my death and how I thought it was going to happen,” he said.

For 13 days he remained in isolation in a local Chinese hospital. He was treated with antibiotics and drugs typically used to treat HIV patients. After two weeks of care he began to show signs of recovery.

The CT scan showed no trace of the illness. He became the first African person known to be infected with the deadly coronavirus and the first to recover. His medical care was covered by the Chinese state. 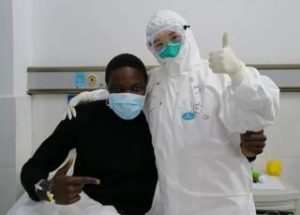 Egypt has become the first country in Africa to confirm a case of the coronavirus. Health professionals warn that countries with weaker health systems may struggle to cope with a potential outbreak of the illness, which has led to more than 1,770 deaths and infected more than 72,000 people, mostly in China.

“I don’t want to go home before finishing studying. I think there is no need to return home because all hospital fees were taken care of by the Chinese government,” says Mr Senou.

To evacuate or not?

Since late January governments around the world, led by the US, began evacuating their citizens out of Wuhan and neighbouring cities.

But thousands of African students, workers and families, remain in lockdown across the central Hubei province – the outbreak began in the provincial capital Wuhan – and some think their governments should do more to help them.

“We are sons and daughters of Africa but Africa is not willing to come to our rescue when we need it the most,” says Tisiliyani Salima, a medical student at Tongji Medical University and president of the Zambian Wuhan student association.